For the poor and vulnerable, two months under a lockdown due to COVID19 may be too long. While the government is rolling out a massive social amelioration program, civil society organizations have been coming to the aid of those in the margins. Despite the effects of the pandemic on non-government organizations themselves, they continue to push on, moved by stories of how the poor help each other and how ordinary citizens spring to action in order to help. How might-we convert these seemingly one-off instances of kindness, creativity, and activism into systemic efforts to zero-out poverty? Join us in Zero Extreme Poverty Philippines 2030 and the UNDP Philippines Accelerator Lab in discussing this challenge by Tweeting using hashtags #Bayanihan #Diskarte #TawidCOVID19

The Novel Coronavirus Disease (COVID19) curve in the Philippines has not been flattened yet: as of the latest count, more than 8,000 COVID19 cases have been confirmed. Last Friday, the President announced that the Enhanced Community Quarantine (ECQ) in Luzon and other parts of the Philippines, which began in March 17, will be extended to May 15.

For the poor and vulnerable who depend on “no work, no pay” contracts, ‘”arawan” jobs, or the informal sector for their livelihoods, two months may be too long.

From 2015 to 2018, about 1.1 million Filipino families were lifted from poverty; in 2018, three million families, or 16.6 percent of the population, remained poor. How many of those families–and millions of others who are just hovering above the poverty line–slid into (deeper) poverty because of COVID19?

The government has readied a “social  amelioration program” worth PHP 275 billion (about US$ 5.3 billion) to provide a monthly subsidy of  PHP 5,000 to 8,000 (about US$ 100-160) for 18 million affected families and implement other responses to COVID19. To date, about 9.4 million families–mostly those who are in the rolls of the government’s conditional cash transfer program–have received their first month subsidy.

This safety net program, which entails massive mobilization of public resources and bureaucracy, is a necessary stop gap. But are these enough? The monthly amounts, for one, are less than the official poverty thresholds, which are about PHP 10,000 (about US$ 200) on average. Apart from that, timing is of the essence, for each day of delay may force families to skip a meal or more: a fact that public servants at all levels are conscious about. Government’s action is a good starting point, but it may not be enough.

Since the crisis struck, civil society has come to the aid of those in the margins since the first weeks of the lock down.

Non-government organizations (NGOs) kicked into action: including the Philippine Business for Social Progress (PBSP) whose Bayanihan Musikahan live stream concert series has raised PHP 66.7 million (about US$ 1.3 million) to date for much-needed personal protective equipment (PPEs) for health workers and fresh food packs for poor families; The Philippine Disaster Resilience Foundation (PDRF) who raised PHP 1 billion (about US$ 20 million) from the business sector for grocery vouchers; and Caritas Manila whose network of parishes served as a crucial delivery system for relief. New groups such as the People for Accountable Governance and Sustainable Acton (PAGASA PH), Urbanismo, and Help from Home have also quickly mobilized volunteers and crowdfunded for much-needed relief.

A survey by the Association of Foundations mapped the various response efforts of 82 civil society organizations (CSOs) and NGOs, including networks and consortia, corporate foundations, faith-based groups, cooperatives, and others. Of the 137 interventions that these organizations have been implementing nationwide, more than a third were food and other forms of relief to vulnerable families as well as front line workers. Many others provided personal protective equipment (PPEs) and other forms of healthcare support, organized fundraising and support mobilization efforts, and helped mediate information and coordinate actions across sectors (see below).

Early in April, the Zero Extreme Poverty Philippines 2030 (ZEP 2030) held a meeting of its lead convenors to find opportunities for collaboration amid their individual responses to COVID19. For background, ZEP 2030 includes the biggest CSO coalitions in the Philippines who are working together to tackle poverty. UNDP Philippines’ Accelerator Lab team has been collaborating closely with ZEP 2030 to help deepen ZEP 2030’s efforts. ZEP leaders  expressed how they had to adjust their operations to the new reality. Nearly all the organizations had to declare work-from-home arrangements, put their regular programs and services on a pause, and shift to crisis response mode. What if things get worse–as they already have in the past month since that meeting–would the CSOs and NGOs be able to sustain their efforts?

What’s clear is that the pandemic has affected the CSOs themselves as much as it has affected their communities. A ZEP-initiated survey of 121 local NGOs found that about 75 percent of the respondents rated the impact of the pandemic on their operations as high or very high. Still, they carry on as they rated their overall ability to respond to their communities’ need at moderately high (4 of 6) on average. While they are weakened by mobility constraints or lack of resources to provide direct help such as food relief or cash aid to their communities, they compensate by actively providing crucial information and playing critical coordination roles with government and non-government sectors on behalf of their communities (see below). 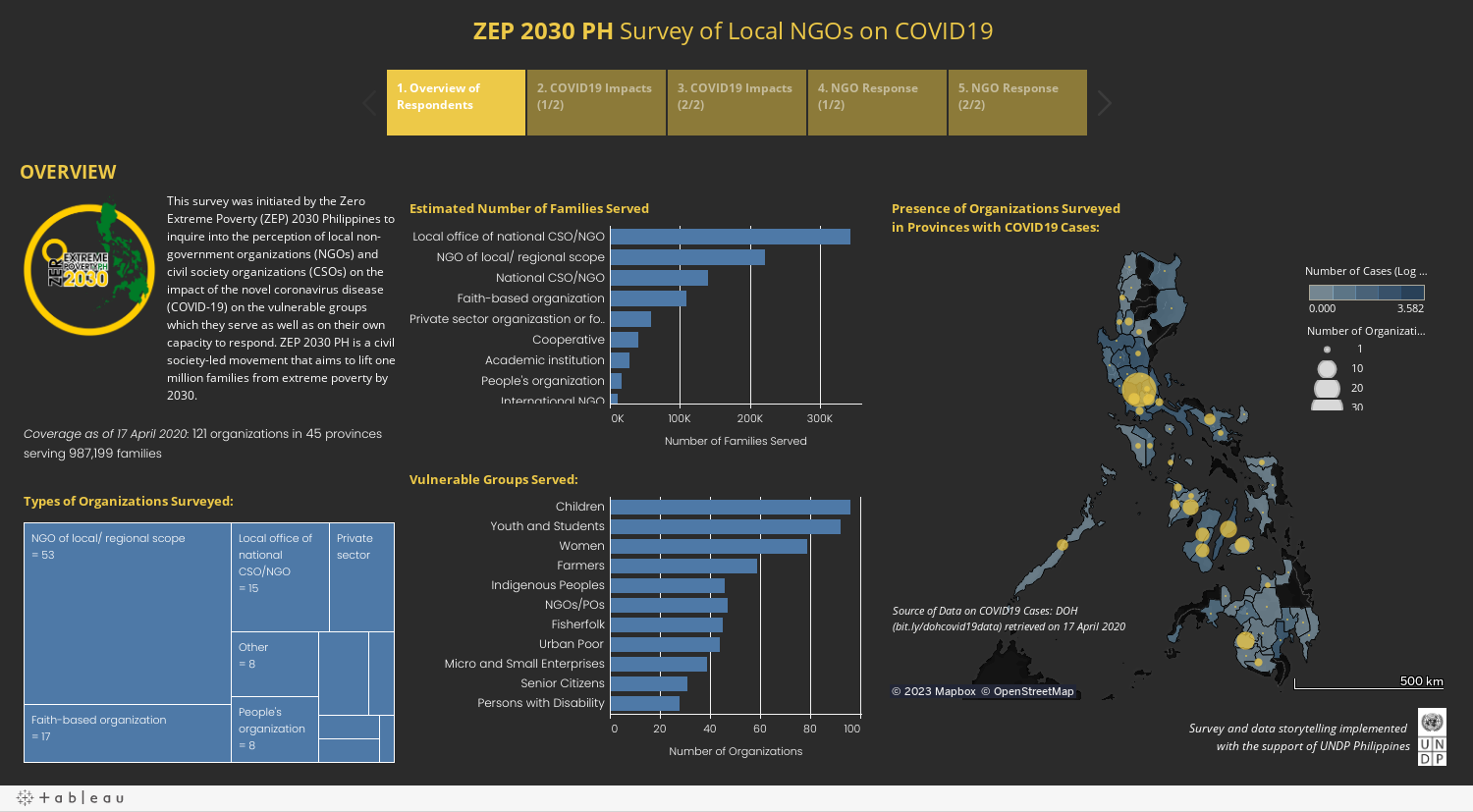 The ZEP2030 survey of local NGOs on the socioeconomic impacts of COVID19 not only confirmed the obvious–that the poorest communities are debilitated especially their work and income–but also surfaced weak signals of how CSOs and NGOs continue to fight on despite the pandemic’s negative effects on them.

The pandemic is, in many ways, a natural experiment which forces public institutions, including civil society, to change how they operate. Suddenly, NGO leaders who place a premium in meeting people face-to-face find themselves having video conferences–and have to deal with Zoom bombings too, unfortunately. Community organizers are relying on a free data version of Facebook Messenger to keep in touch with their communities. In some cases, donations, money transfers, and purchases are being made through mobile money and online banking channels.

Even surveying and data gathering–done face to face traditionally–had to be innovated. On their own, CSOs and NGOs launched their online surveys, ran headcounts of families requiring help via call and SMS, and kept chat groups buzzing with information on who’s doing what. These have their limits, of course: online surveys, while democratizing survey instruments, carry an inherent bias against those without regular internet access. The members of ZEP 2030, in partnership with UNDP, agreed to collaborate on sharing and making sense of information from these data sets. Moreover, we are trying to find new ways to reach households and assess their needs given mobility and mobile data constraints: a socioeconomic impact assessment survey delivered through chatbots that we developed with startup AI4Gov.

CSOs and NGOs adapt, perhaps not only because the context requires it, but more so because of a quality–the “spark of activism,” as Tanya Hamada of iLEAD put it–that has enabled them to see through regime changes and economic crises. “But this spark is only enabled if that activist is surrounded or supported by a web of CSO capacity,” she said. CSOs and NGOs, after all, exist not just to deliver services to the poor or relief goods to victims but, more fundamentally, to find opportunities for change in the midst of crises.

What opportunities for change has this crisis surfaced?

New economic arrangements founded on greater inclusiveness? Rey Laguda of PBSP shared how inclusive and sustainable value chains have emerged from the crisis response. He cited, for instance, how the sudden scarcity of canned goods–the quintessential relief goods–forced them to scour for other sources of sustenance. They ended up sourcing vegetables from farming communities in Benguet–who were about to throw away their produce after their traditional supply chains were clamped down in the ECQ–for the relief packs for urban poor communities in Metro Manila.

Sure, this operation was made possible by logistical prowess, but as Laguda related, it could not have happened if not for the inspiration coming from witnessing how the families themselves are helping each other. He recalled an instance when the relief goods they dropped off to a community was 200 packs short of the 500 families there. Rather than fight over the 300 packs, the families chose to repack the goods to ensure that everyone got their rations. “It was like the division of the loaves and fish,” he recalled. And there are many other stories of exclusive subdivision folk helping their poorer sitio neighbors, friends organizing themselves for relief efforts.

How might we convert these seemingly one-off instances of kindness, creativity, and activism into novel, scalable, and systemic efforts to achieve outcomes that society has so far failed to meet, like zeroing-out poverty? How might we turn crisis into change for the better?

We don’t have all the answers, but in the UNDP Philippines Accelerator Lab we are actively exploring them and invite you to explore with us.

One challenge is in being able to capture stories from the field. There are several notable initiatives, like LGU vs. COVID19 and Help from Home PH, which catalog information on how LGUs can take action based on their peers’ actions or how micro-volunteers and -donors can pitch in. But what’s missing so far is a documentation of these stories as well as a mapping of grassroots innovations–hacks and improvisations of ordinary folk in order to survive and help others–and find gems that can be replicated elsewhere. We intend the ZEP-UNDP COVID Pulse survey will be a starting point to doing this–for in it respondents will have a free space to share their stories–but let us know if you have other ideas or if you’ve encountered similar efforts.

We also want to document and promote symbiotic relationships between activists and innovators on the one hand and CSOs and other institutions on the other. How can we kindle these “sparks of activism” while at the same time bolstering the institutional capacity of CSOs and NGOs? Over the last two weeks, Help from Home, Urbanismo, and CSOs who are part of ZEP 2030 have forged an alliance to align their parallel efforts to put more ears on the ground and strengthen accountability mechanisms through volunteer organizing backed by technology. The COVID19 Action Network that is steered by the Action for Economic Reform is another broad coalition composed not only of seasoned civil society folk but also young, creative turks and techies. And about 50 volunteers led by the indefatigable Ken Abante and in collaboration with AER and many other CSOs and CSO coalitions, have put together a massive effort to clean and curate public data sets and build a dashboard to monitor public spending on COVID19.

What opportunities can be generated from such synergies–in particular, opportunities to learn from each other? We are hoping that similar crowdsourced solutions mapping and community-based data gathering efforts can collaborate (and also *hopefully* potential funders to beef up the efforts). Moreover, to make these efforts work, we want these efforts to have meaningful collaborations with public servants.

May mga ideya ba kayo kung papaano makakalap at mapapalawig ang mga kuwento ng #Bayanihan at #Diskarte para maka-#TawidCOVID19 (Do you have ideas on how to gather and scale these stories of cooperation and creativity to surpass COVID19)? Tweet these using these hashtags (and also tag @zeropovertyPH, @UNDPPH, @kapicapistrano, @irinavelalala, and @chimp_rex).